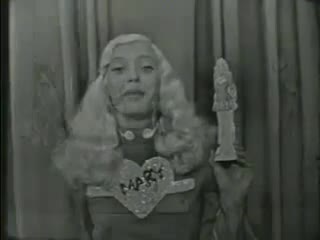 Mary Hartline was a popular television personality during the 1950's, with her friendly personality and sex appeal giving her appeal to many ages. She is best known for her work on "Super Circus", which is where this commercial came from, although she also hosted the extremely short lived program "The Mary Hartline Show".

Almost completely forgotten today, this appealing lady was, for a few years, a major television star.

Examples of her television work are stored at the UCLA Film and Television Archive, The Paley Center for Media, the Ira Gallen Archive, and maybe a few other archives too.

As for the commercial, well Mary Hartline was never at her best during commercials, she was best at comedy segments, but this is still an appealing commercial.

The product though is not exactly one of the better fifties toys, though it does look like fun.

This movie is part of the collection: Classic TV Commercials

Spider-Man: Into The Spider-Verse Trailer

The Spongebob Movie: Sponge On The Run Trailer

By the Sea Trailer

The Beach Girls and the Monster